4th of July themed recipe swap…S’mores for everyone!

How was your holiday weekend?  Ours was nice, although the weather didn’t really cooperate on Sunday.  My cousin rescheduled her BBQ for Monday so I had an extra day to make the dessert I planned on bringing…then thought, maybe I can make it ahead so I’m not rushing around in the morning?  Hmmm…better ask Elisha from DeLish, whose recipe I was fortunate enough to get in our latest swap.

Elisha was making her delicious S’mores Bars for a party the next day as well, and assured me they’d be fine.  She’s been making this recipe since she was in high school, so I naturally took her word for it.  I made one pan and adapted it just a bit…instead of using chocolate chips on top, I used mini Hershey chocolate bars that I had.

Then I took it one step further and made a “flag” out of the bars.  And yes, you’ll have to tilt your head to the right to see what I’m talking about since, for the life of me, I can’t get this picture to rotate!  (ugh, I need my other laptop back) 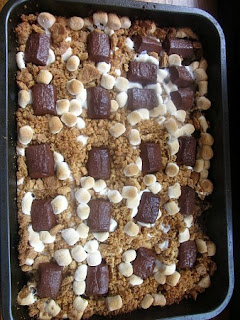 That’s about as patriotic as I got with my food this weekend.

As soon as these bars hit the serving table, they were GONE.  All the kids were yelling at their moms to get the recipe from me.  People were taking seconds.  I absolutely should have made another pan… 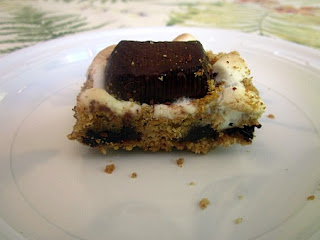 One word – delish 🙂  Thanks again, Lishie…these were a huge hit!

Beat butter and sugar with electric mixer on medium speed until light and fluffy.  Add egg and vanilla and beat until combined.  In another bowl, mix graham crackers, flour and salt.  Stir the graham cracker mixture into the wet mixture until it’s combined (it will be crumbly and clumpy).

Press around half of the mixture on the bottom of the pan, then top with chocolate chips, followed by 3 cups of the marshmallows.  Crumble the rest of the graham cracker mixture evenly on top, then lay the chocolate bars over it, followed by the remaining marshmallows.

This entry was posted in chocolate, cookies, dessert, marshmallows, QuickAndEasy. Bookmark the permalink.

7 Responses to 4th of July themed recipe swap…S’mores for everyone!