A takeout favorite, minus the phone call

I was excited when I received this recipe for one of the swaps I participate in…whenever Frank and I order Chinese we ALWAYS get wonton soup.   I was hoping this would be good enough to satisfy our craving without having to have it delivered, and I was right!  It was a delicious Saturday lunch.


I’ve made dumplings before so I used the same method rather than what the original recipe suggested.  Hey, as long as it’s sealed tight and the filling doesn’t fall out, that’s all that matters!  Do whatever you’re comfortable with.


I added fresh ginger to the broth to give it more flavor.  Also, do yourself a favor – DON’T skip the sesame oil at the end – it definitely is a great way to top the soup off. 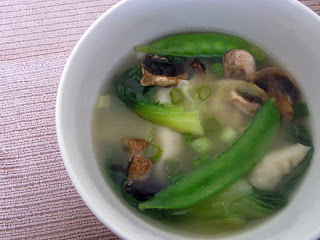 Finely chop 1 tablespoon of green onions and 1 tablespoon of sliced mushrooms, and place in a bowl with the ground pork, 1 tablespoon sesame oil, 1 tablespoon soy sauce, egg, bread crumbs, salt, and pepper. Stir until thoroughly mixed.
Spoon about 1 tablespoon of the pork filling onto the center of each wonton wrapper. Use your finger or a pastry brush to lightly moisten the edges of the wonton wrappers with water. Fold one side of the wrapper over the filling onto the opposite corner to form a semi-circle. Press the edges together to seal.
Bring the chicken broth and ginger to a boil in a large saucepan over medium heat. Drop the wontons, one by one, into the broth, and let them cook for 3 to 5 minutes (or until they float to the surface).
Reduce heat to a simmer, and gently stir in the bok choy and reserved sliced mushrooms. Let the soup simmer 2 more minutes, then drop in the snow pea pods.
Garnish with the remaining green onions, soy sauce and sesame oil, and serve immediately.

This entry was posted in Chinese, pork, QuickAndEasy, soup. Bookmark the permalink.

4 Responses to A takeout favorite, minus the phone call