Our monthly recipe swap took a different twist this time around – our theme was Secret Recipe Club style (as you’ve seen me blog here before), so we had a lot of freedom as far as what to cook or bake.  The blog I was assigned is one I’m very familiar with, and one I’ve chosen other recipes from in the past…The Jey of Cooking, which belongs to my friend Jessica.

Jey has some great dishes to choose from, so it was no easy task to pick just one.  I had a few on deck, but ultimately chose one that used tilapia, since I knew I wanted to prepare it one night this week.  So, I was all set to go and headed into my pantry to get the ingredients, when I realized that I had no almonds (yikes!) which are a main ingredient to the dish.

I looked further and saw an unopened bag of almond meal.  Why I bought it a while back is beyond me, but it finally came in handy.  Just be careful when you turn the fish in the pan…the almond meal is delicate and will come off easily.  There was still plenty of coating on the fish but I’m putting it out there so you handle with care. 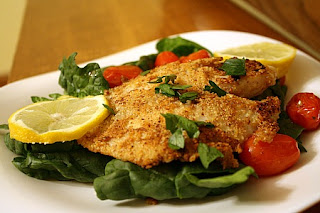 I may have made a few adaptations to the dish, but it was delicious…we both loved it, and it was a nice, light meal to have after all the recent holiday indulging.

Another great recipe from Jey…be sure to check out her blog!

Heat oil in skillet and add tomatoes.  Cook until they pop or are close to it, about 8-10 minutes.  Put spinach on plates and place hot tomatoes on top.  Set aside.

Beat egg with lemon pepper, red pepper and garlic powder.  Put almond meal and cheese in another shallow bowl.  Dunk each filet in egg mixture, followed by almond meal mixture, and place in same skillet used for tomatoes.  Cook until golden brown, about 3-5 minutes per side.

Place fish on top of spinach and tomatoes (spinach will wilt from heat of fish).  Add lemon and parsley to plates and serve.