It’s Secret Recipe Club reveal day!  This month, I was assigned a terrific blog called Edesia’s Notebook.  Lesa has a wide variety of great looking recipes…there were so many to choose from!  I took a look at her recipe index when I first got my assignment, bookmarked about 5 of them, then had a pretty busy few weeks.

And then came Hurricane Sandy.

We were hit HARD here, as I’m sure most of you know.  More devastation than this area has ever seen before from a natural disaster.  There is a TON of work to be done to rebuild, many have lost their homes and possessions, and there are still an overwhelming amount of people without power, one week later.

There is only so much you can do for others during a time like this.  My husband, who is a licensed electrician, has been spending a lot of time at the homes of family and friends, hooking up their generators for maximum usage.  It’s what he does well.

And me?  My contribution was what I do well…feed people. 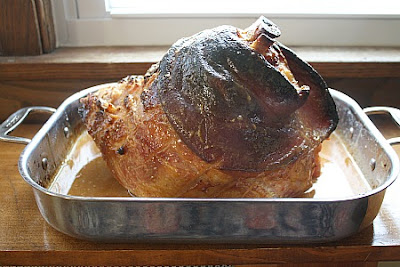 There’s something super comforting about a baked ham.  And it feeds a LOT of people.  Perfect for a time like this.

The glaze was delicious and used ingredients that I had on hand, which was great since the majority of our grocery stores have either been out of power, or low on inventory.  We enjoyed some of this ourselves, and I made a great (and easy!) meal with the bone…come back here later in the week to check it out. 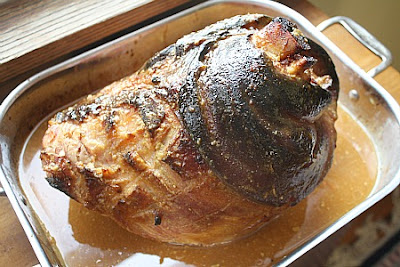 I definitely recommend this for those of you who make ham for the holidays.  Thanks for a great recipe, Lesa!

Remove ham from refrigerator and let stand for about 30 minutes.  Preheat oven to 325 degrees.

Score fat (don’t cut into meat) in ham in a diagonal crosshatch pattern.  Place in a roasting pan, flat side down.  Bake for about 2 1/2 hours (15 minutes per pound).

While ham is baking, combine juice, sugar and mustard in a bowl and mix.  Remove ham from oven and increase oven temperature to 425 degrees.  Pour half the glaze over the ham and brush to coat.  Return ham to oven and remove every 10 minutes to baste, for a total of about 40-45 minutes.