This is one of those “let me clear out the fridge and see what I can scrounge up” kinds of dishes. We’ve all been there. And your mind changes 100 times while going through what you have. You think you’re in the mood for one thing, then another, then another…then you realize that you can never go wrong with anything buffalo. 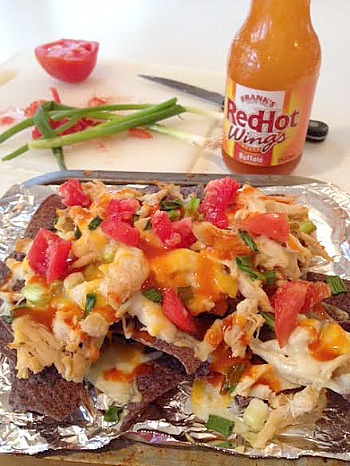 My only regret is that I didn’t have blue cheese. But it still hit the spot. Next time though, I’ll be sure to have it! Because really, what’s buffalo anything without blue cheese 😉

Place chips on broiler pan covered with foil. Add chicken (which you can toss in wing sauce first if you like!), followed by cheese. I used the toaster oven and cooked it for about 7 minutes at 350 degrees, but time will vary depending on the amount you have. Mine was a small portion.