Chicken of the Sea

My mother-in-law gets very excited when we come down to their shore house to visit.  The main reason, of course, is because she gets to hang with Bella.  As most of you newer parents know, we mean nothing once we start popping the kiddies out…it’s all about the grandchildren.  Melissa who???

Another big reason: she gets to eat the foods she loves and misses because my father-in-law refuses to eat them.  Like seafood.  FIL won’t touch it with a 10 foot pole.  He won’t even let her cook it on the grill because it’ll “ruin it” and poison his meat.  So, she waits until I’m there so she has someone to enjoy these forbidden foods with.

My sister-in-law’s fiance recently went fishing and caught tuna.  He had it cleaned and cut, and left a bunch of it at the inlaws’ house, where it’s been patiently waiting in the freezer to be used.  So, MIL was happy to bust it out of there so we could indulge.

I threw together a quick marinade that tastes great in the broiler – I’ve used it on the grill many times before and it’s really delicious.  It would work well with other fish too, like swordfish, mahi mahi, scallops…try it on your favorite today. 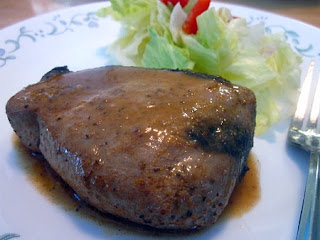 3 Responses to Chicken of the Sea