If a dish can still be great, even after a few mistakes, I can only imagine how amazing it would be if it were prepared without any flaws. 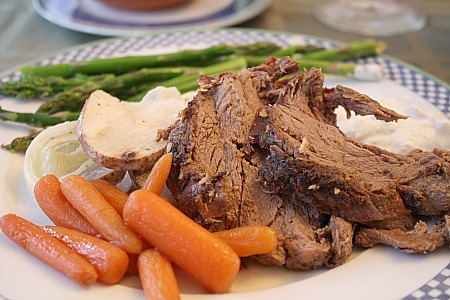 I made this beef tenderloin on Easter, Part 1 (Saturday). Problem #1 was that I had no kitchen string. Which really isn’t a problem for any other reason besides it not looking so great. Which, when you write a cooking blog, is a problem. 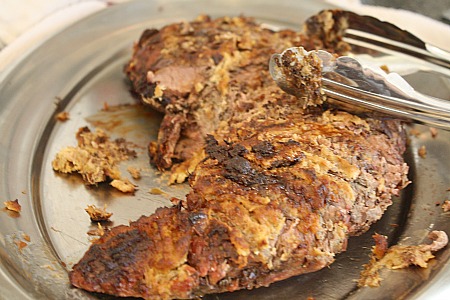 The other problem? Well, take a look at it. The #1 faux pas when it comes to cooking beef…OVERCOOKING! The recipe was written based on cooking a 2 lb. tenderloin. Mine was 4.75.

So, I figured doubling cooking time was best…until about 20 minutes before the time was up and a light bulb went off in my head. Too long! TOO LONG!! I immediately took it out, but it was too late.

The good news, though, is that it was still tender and delicious. And the horseradish sauce it’s served with makes it even better.

Long story short – make this dish, and learn from my mistakes! 🙂

Preheat oven to 400 degrees. Combine horseradish, oil and mustard in a bowl. Rub meat with salt and pepper then evenly distribute horseradish mixture all over it. Tie string around meat in 3 places. Place meat in roasting pan.

Roast for around 35-45 minutes, or until temperature in the middle reads 140 degrees. Transfer to cutting board at let rest for at least 5 minutes. Remove string, slice and serve with horseradish sauce.

Combine all ingredients in a bowl and stir. Refrigerate until serving.

This entry was posted in beef, condiments, main dishes, sauce. Bookmark the permalink.