More from the Far East

I’m on an Asian kick lately, it seems.  Guess it makes sense when you’ve got an ingredient left over from a previous dish, like I did in this case.  I had to use up the bok choy I bought for my wonton soup, and I had a pork tenderloin ready to go.

I made a few changes to the original recipe, including the addition of cauliflower to bulk up the dish.  I thought I had water chestnuts but I was wrong 🙁  Add them in if you make this – it’ll give it a nice crunch!
Also, I thought the amount of chili pepper the recipe called for was light, so I added an additional teaspoon.  Plus, I had dried chipotle pepper flakes, not chili, so I used that.
Oh boy.
Frank almost choked during the first bite, then midway through got an extra bottle of water.  Oops!  Stick to the 1/2 teaspoon unless you’re up for some serious heat. 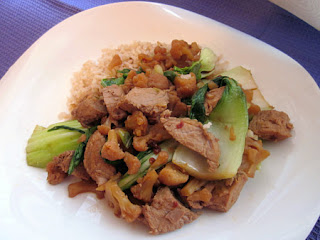 Heat the canola oil in a dutch oven, then brown the pork on all sides. Add the marinade, cover and cook in the oven for 25 minutes or until cooked through. Remove the pork from the pan, then leave to rest (covered). Pour off the juices and reserve.

Add the bok choy to the dutch oven, brown over a high heat, cover and cook gently for 5 minutes until just tender.  Add the cauliflower and  and mix gently.

Cut the pork into chunks and add it to the dutch oven, followed by the scallion.  Mix and heat through for one minute.  Serve with rice.

This entry was posted in Chinese, main dishes, pork. Bookmark the permalink.

3 Responses to More from the Far East