I can’t believe Christmas Eve is on Friday!  The month totally flew by.  I don’t know – I’m just not “feeling it” as much as I usually do.  The fact that I’ve been under the weather is making it worse, I think.  And that doesn’t exactly make me jump for joy and get excited about cooking a nice meal.

Between that, and wanting to clear some stuff out of the fridge since we won’t be around much later this week/weekend, I decided to make another pizza tonight.  Same crust as last week, same cooking time, but tonight I used leftover sauce and meatballs (cut up) from Sunday’s meal, fresh mozzarella and pecorino romano, pepperoni, sliced red onion, and some crumbled blue cheese – and served it with a green bean, beet and red onion salad.  Mmmmm. 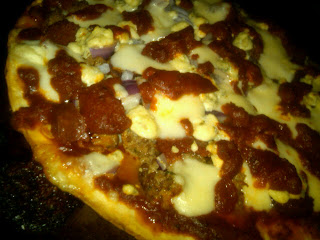 …and then I finished almost all my gift wrapping.  Go me.  Now someone bring me a hot toddy!