Everyone has their moments when they just want to dive into a bowl of chocolate.

Or is it just me? 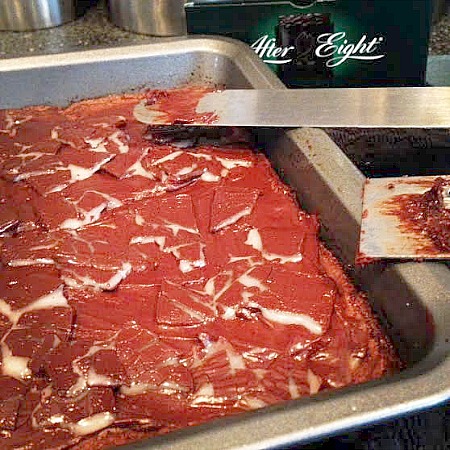 Anyway, do yourself a favor and buy a box or two. Keep them in your pantry for those moments I mentioned above. And make sure one of those boxes is the one that includes chocolate chips. Because it rocks.

And don’t forget the After Eights. Andes Mints would work just as well. Because minty goodness on top of that pool of chocolate can’t be beat…

Preheat oven to 325 degrees. Mix brownies according to box instructions. Grease a 9×9 square pan and pour mix in. Bake for around 40 minutes.

Remove from oven and cover with the mints. Put back in the oven for about a minute. Remove and spread mints around top of brownies until smooth and melted.

This entry was posted in bars, chocolate, dessert, QuickAndEasy. Bookmark the permalink.