Hope everyone had a great weekend! We celebrated my brother’s birthday and since I bought a ton of apples the other day, I suggested making an apple dessert to bring to him. He agreed, as long as it had caramel in it. No problem. 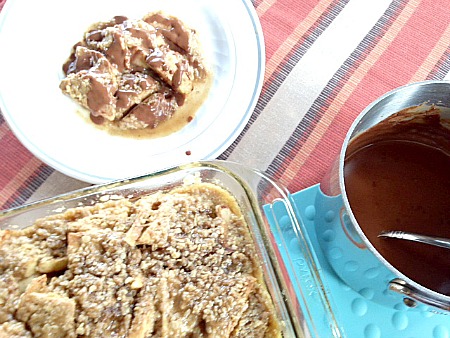 Does that sauce look like caramel to you? Me either. Since I can barely remember my name these days, it was no surprised that I forgot to bring the caramel sauce with my already made apple crisp. But my brother had a great idea…he pulled two of his favorite things out of the cabinet, and suggested we make a sauce out of them. If you remember his birthday cake from last year, these two ingredients should be no surprise. 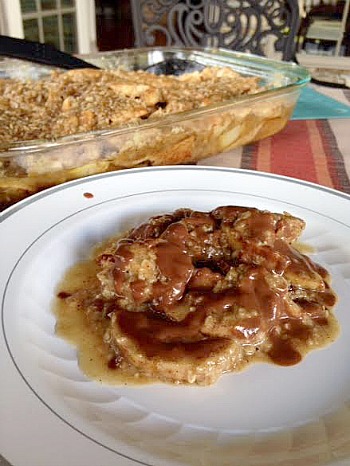 Best adaptation EVER. But of course, feel free to use caramel if you like 🙂

Preheat oven to 350 degrees. Place apples in a bowl and add 1/2 teaspoon cinnamon. Toss until evenly coated and set aside. Grease or spray a 9×13 baking pan.

Bake covered for 30 minutes, then remove foil and bake another 15-20 minutes. While crisp is baking, place peanut butter, Nutella and milk (add slowly, not all at once) in a saucepan and stir until desired consistency for sauce is reached. Again, add milk a little at a time, and more as desired as it cooks.

Serve with sauce drizzled on top. Whipped cream or ice cream would also be delicious with this!

This entry was posted in dessert, family, fruit, make ahead, Nutella, peanut butter. Bookmark the permalink.