Over the weekend, we celebrated my sister and brother-in-law’s birthdays.  They’re the same age, just 3 days apart.  Sweet.

Soooo, last year we were all away, which meant that there were no birthday cakes made.  Rick’s request for baba rum went unfulfilled. 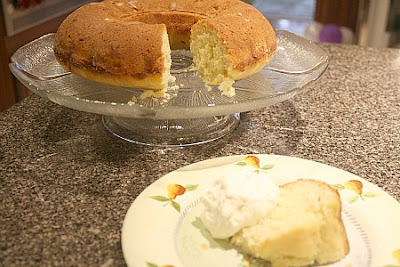 And don’t think he let me forget it, either.  For a little while, I thought maybe I wrecked his car or something.  But no…it was just a cake gripe.

So, I made sure he got it this year.  365 days of torture is more than enough for me. 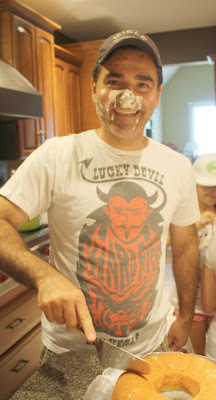 He thoroughly enjoyed it, as you can see…

I highly recommend increasing the amount of rum in the recipe…I’d say to one cup…it tasted great but definitely could have used more of the rum flavor.  We ended up adding it to the whipped cream to compensate 🙂 This cake was delicious, and an easy one for those who fear yeast!  Just one simple rise – that’s it.

Dissolve yeast in warm water in mixing bowl.  Stir in butter, eggs, sugar, salt and one cup of flour.  Beat until smooth.  Stir in remaining flour until combined.  Spread batter into greased bundt pan.  Cover, and let rise in warm place until doubled (about 1 hour).

Preheat oven to 375 degrees.  Uncover cake and bake for about 30 minutes, until golden brown.  Let cool in mold for about 10 minutes, then poke holes all over cake and pour in rum syrup.  Let sit in pan until ready to serve, then turn onto cake plate.  Serve with whipped cream.

to make the rum syrup:
Heat sugar and water over until boiling, stirring occasionally.  Lower heat to simmer and cook another 2 minutes, then cool to lukewarm.  Stir in rum.

This entry was posted in cake, dessert, family, rum, yeast. Bookmark the permalink.