Cooking on a budget

Do you plan your meals (or at least, your shopping list) based on what’s currently on sale?  I usually do.  My feeling is, why pay more if you don’t have to?  Plus, we have two refrigerator/freezers, so we have space to store what we don’t use right away.  Then, I work with what I have and either use existing recipes, or find new ones to try.

So tonight, it was london broil.  I’m still not feeling 100% so I didn’t want anything too complicated – which usually equates to using the crockpot.  Fortunately, I found a recipe online that didn’t involve anything too “pot roast-ish” or adding cream soups.

It was delicious – the meat was very tender which is tough when it comes to london broil.  And, instead of thickening the broth so it became more of a gravy, I saved it (with the onions, of course) for soup, which will probably involve some sort of melted cheese on top, a la French Onion. 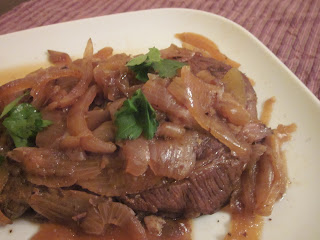 Also, I made my friend Megan’s famous baked macaroni & cheese last night, and put it right in the fridge – so all I needed to do was reheat it.  It rocks!  It’s her grandmother’s recipe and she’s been making it forever.  It’s SO easy, and you gotta love your Le Creuset during times like this when a dish goes from stove to oven.  Makes it even simpler.  Plus, it’s inexpensive and makes a LOT, so you can feed a lot of people, or freeze what’s left.

Have I mentioned how much I LOVE CHEESE??  Next time I’ll be making this with different varieties…this version was all sharp cheddar.  And it was goooood. 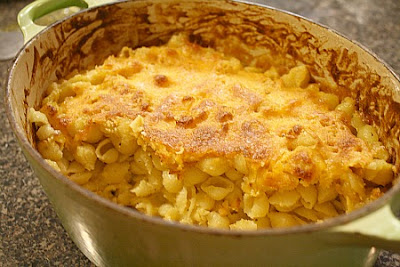 Side note – please, if you aren’t already a fan of mine on Facebook, go to my page and “like” me…and pass the word along to your friends.  The next giveaway will be announced when we hit 350 fans.  Let’s make it happen SOON! 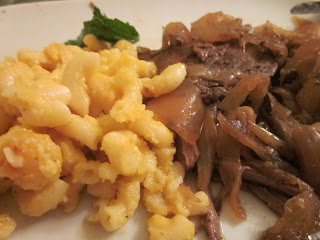 Season the meat with salt and pepper.  Make slices in the meat large enough to fit the garlic pieces, and stick them in the holes.
Place one onion in the crockpot, then the meat, then the rest of the ingredients on top.  Cook on low for 4-5 hours.

4 Responses to Cooking on a budget