I have admitted here before that I’m much better (and more confident) with cooking than I am with baking.  Part of the reason why I chose to bake everyone’s birthday cakes when I started this blog was to fine tune my baking skills, which in my opinion needed a lot of sharpening.  And still do!

What I don’t think I’ve mentioned, however, is my fear of yeast.  I’ve been writing this blog for over a year, and I’m not sure if anyone’s noticed that I haven’t baked one thing that included it.  Until now.

A few weeks ago I got my Secret Recipe Club assignment for the month.  I perused the blog that was given to me and came across what I considered to be an easy bread recipe.  Yes, it required yeast, but I mentally prepared myself for it.  So, off I went to Trader Joe’s, and purchased my first packet of yeast.

The next day, I got an email from SRC that our assignment for the month was canceled.  But, the trooper that I am decided to continue with facing my fear and bake the bread.  Yeah…a woman on a mission.  Go me! 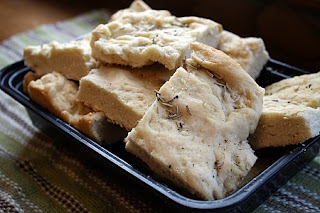 Not too shabby, if I do say so myself.

The truth is, you can buy amazing bread in this area, like, the best pretty much anywhere…so, I guess if that weren’t the case I’d have done this sooner.  I’m not sure how often I’ll be doing it, but at least now I’ll have a bit more confidence 🙂

Heat oil and garlic in a small saucepan until garlic begins to brown.  Remove from heat, discard garlic and let oil cool.

In bowl of stand mixer, add water and yeast.  Add half of oil.  In large bowl, combine flour and salt.  Attach dough hook to stand mixer and and add half of flour mixture to mixing bowl.

Oil a large bowl and transfer dough to it.  Turn dough so oil covers both sides.  Cover with plastic wrap and let rise in a warm place until doubled in size, about an hour.

Grease a 9×13 baking pan with some of the remaining oil.  Remove bread from bowl and gently press into pan, working it out so it reaches all edges.  Lightly coat a piece of plastic wrap with oil and cover dough again.  Let rise for 30 minutes.

Preheat oven to 450 degrees.  Using your fingertips, make indentations around dough in various places.  Drizzle garlic oil over dough, then sprinkle with salt and pepper, and finally rosemary.

Bake for about 20 minutes or until golden brown.  Transfer to wire rack to cool.

Linked to: Bread Recipe Link Up

This entry was posted in bread, garlic, yeast. Bookmark the permalink.

9 Responses to Facing my fears