Another successful recipe swap week!  Brianna from Oishii submitted a recipe for baked kale chips that I was assigned.  I was thrilled because I’ve been meaning to try it, and actually was in Whole Foods a few weeks ago looking to buy kale, but they were out.

I was pretty surprised by that, but what shocked me even more was that Frank was not only looking forward to trying them…he actually enjoyed them!  I thought for sure he wouldn’t be a fan.  Bella, on the other hand…not so much 🙂

I know, the picture doesn’t look like much of anything.  It actually just looks like a raw piece of kale.  The ends didn’t brown much, like Brianna said they might, but it still crisped up nicely and had a good texture. 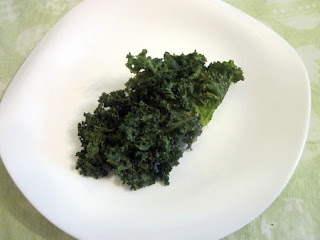 This is a delicious and healthy item that can easily help curb a crunchy or salty craving.  I served it with dinner but it definitely works as a snack, too.  Thanks, Brianna!

Preheat oven to 250 degrees.  Put all ingredients in a bowl and mix together, then place on a baking sheet.

Bake for approximately 30 minutes.  Midway through, gently toss kale.  Toward the end, keep a close eye on it to be sure it doesn’t overcook.

This entry was posted in kale, side dishes, snacks. Bookmark the permalink.