In honor of our Greek New Year’s Day tradition…Kali Xpovia!

This year, Nana celebrated her 88th/90th birthday (don’t ask).  Since she’s been suffering from dementia for a few years now, we can’t get any information about the past from her…which is why I searched online for a Vasilopita recipe so that I could revive the tradition that we skipped the past couple of years.

Vasilopita, which means “St. Basil’s Bread”, is a bread (or cake) that is served by the Greeks on New Year’s Day.  It became a custom in the fourth century when St. Basil wanted to give money to the poor people in his community…but to avoid embarrassment, he would have his church members bake bread with gold coins inside of it, then distribute it to these people.  This began the tradition, and now Greek households everywhere serve this bread with one coin (which, for us, is a dime wrapped in aluminum foil)…whoever gets the piece with it has good luck for the entire year. 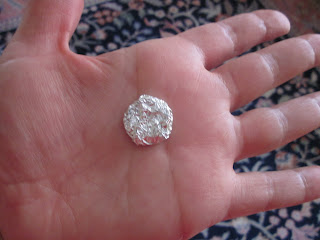 And now for the dirty truth.  I’m not going to lie.

The recipe that I used was easy enough, and as I was making the batter it looked and smelled delicious.  I was stressing over the fact that I didn’t have the size pan it called for, and that I always remember it being served in (a round pan 12-13 in. wide and 2-3 in. deep).  After consulting with my mom we decided that a springform pan would work just fine (even though it’s 9 in. wide). 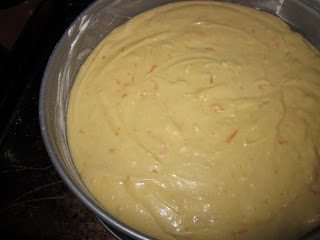 I baked it, stuck the coin in midway (like the recipe said) and took it out after the suggested time. 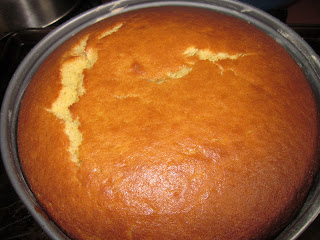 To make a long story short, I should have baked it longer.  I transferred it to a plate and after a few hours, went to check on it…and found a nice big hole in the middle, with a super gooey puddle inside.  Good times.

I put it directly on the sheet pan and baked it for another 15 minutes, but it didn’t help much.  So, I did what all good cooks do…I improvised.  I stuck whole almonds in the cake through the hole, followed by some shredded coconut.  They were toppings I was going to use on the cake anyway, so who cares if they’re inside, too?  Right? 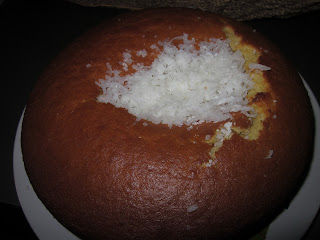 And now, more of the dirty truth….

First of all, nobody in my family really EATS the cake.  Everyone goes digging through their piece to look for the coin, maybe taking one or two bites in the process, then leaves the crumbly mess on their plate and goes about their business.  So, it really isn’t the end of the world if the cake was “custom made” this year.  (By the way, I will update tomorrow after each family member gets their piece and let you know who wins the luck of 2011!)

Second (and this I JUST found out)…Nana never baked this cake herself.  Neither did Aunt Joan, who I thought did for the past several years, and who I asked for the recipe.  Apparently, Greek Mary in Union City has been making my family’s Vasilopita since we came here from Europe.

So much for tradition!  But I will continue to hold the torch…I’ll just buy the right pan next year 🙂 and if it works, I’ll post the recipe.

Happy New Year to you all!!  I hope 2011 brings you and your loved ones health, wealth, happiness…and most of all, good food 🙂

Oh, and tomorrow keep an eye out for my post about our Italian New Year’s Day tradition! 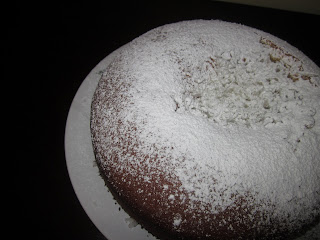 3 Responses to In honor of our Greek New Year’s Day tradition…Kali Xpovia!