This one was a biggie!  Not sure what the official total is out there, but it’s definitely around 2 feet.  And the wind is out of control!  Crazy.  Even though Bella talked a lot about going out to play in the snow, she didn’t last more than a few minutes… 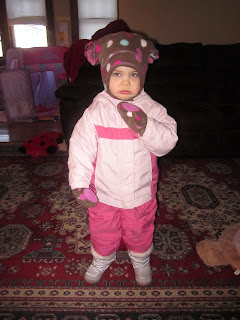 Weather like this definitely calls for comfort food.  I busted out the crockpot and threw together an oldie but goodie.  I don’t even remember where this recipe originally came from – I’ve been making it a long time and have done a ton of tweaking to it anyway.  The key is, cut the vegetables in big chunks so they don’t get mushy and fall apart.  It still doesn’t make for a pretty picture, but it tastes damn good 🙂 and there’s always plenty of leftovers. 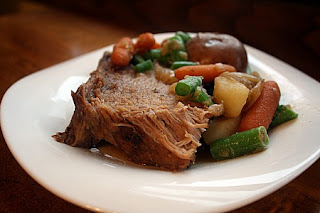 Crockpot Pot Roast with Veggies
3-4 pound bottom round roast
salt and pepper
5 potatoes, unpeeled, cut in large chunks
5 carrots, peeled, cut in large chunks (or baby carrots)
2 onions, cut in large chunks
green beans (fresh or frozen)
1 envelope onion soup mix
1 1/2 cups water
Season the roast with salt and pepper and place in crockpot.  Add half of the potatoes, carrots and onion around the sides, then half of the soup mix, then half the water.  Toss in the rest of the vegetables (except the green beans) followed by the remaining soup mix and water.
Cook on high for 4-5 hours or low for 7-8 hours.  Add the green beans about 30 minutes before serving.