I have to admit, I’m starting to get a little confused…whose recipe is for which swap and when is it due and what’s the theme and what do I need to get at the store and…I need to get my act together!  Still, I love participating in them…95% of the time it adds a great recipe to my collection.

The theme for this particular weekly swap was easy weeknight dinners.  I received a recipe from Nichole, author of The Cookaholic Wife, for Beef Au Jus Sandwiches.  I had a very hectic day and still was able to run home and get this on the table in less than 30 minutes…not bad!

This is a fantastic way to spice up boring deli meat.  It’s also a great idea when thinking of what to serve to a crowd for the big game.  Frank really liked it.  He had his on a long roll – I had mine sans bread (behaving!).  It was delicious, even on its own. 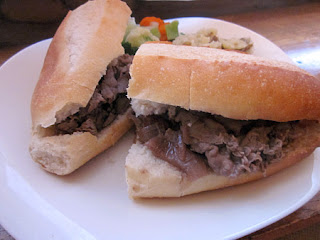 I served it with smashed potatoes and steamed mixed veggies.

The recipe below reflects the changes I made to make it a bit lighter…we loved it.  Thanks for a great dish, Nichole!

Melt the butter in a dutch oven.  Add onion, garlic and bay leaf and cook for about 10 minutes, or until soft and lightly browned.

Add wine and bring to a boil.  Reduce to simmer and cook until liquid reduces.  Remove bay leaf.

Add flour and whisk in until evenly distributed.  Pour in broth and add salt, pepper and thyme.  Bring to a boil then reduce to simmer.

Add meat to the pot and let it soak in the juices for about 5 minutes.  Place on rolls, top with sauce and serve.

This entry was posted in beef, main dishes, QuickAndEasy, sandwiches. Bookmark the permalink.