There’s never a bad time for pasta.  Especially when you’re looking for something comforting.  Italians know exactly what to do.   This is one of those quick, easy, delicious and “homey” meals that instantly makes you feel better. 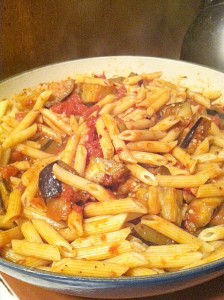 It would have been nice if I actually remembered to take a pic once it was in my dish, or with the ricotta in the pan. But you get the idea. And if you don’t, just make it…then you’ll get it.

Believe me, you’ll DEFINITELY get it.

Put eggplant in a large bowl and toss with salt. Toss into a colander and let drain for an hour. Rinse under cool water and pat dry with paper towels.

Preheat oven to 400 degrees. Brush baking sheet with oil. Place eggplant on pan and toss to coat with oil. Spread evenly on pan. Bake for 25 minutes, turning once while cooking.

Cook pasta according to package instructions. Meanwhile, heat a few tablespoons of oil in a large skillet. Add garlic and cook for a few minutes. Pour in tomatoes and stir in crushed red pepper and a little salt. Bring to a boil, then reduce to simmer and cook for 10 minutes.

Drain pasta and add to skillet, followed by half the eggplant and half the grated cheese. Stir together, then add remaining eggplant and cheese, and basil. You can either add the ricotta to the skillet and stir quickly before plating right away, or add it to each individual bowl. Top with grated cheese and a shake of crushed red pepper, if desired.

One Response to Pasta alla Norma