I’m sure I’m not the only one who cooks with ingredients that their spouse doesn’t like when they’re not home for dinner.  Right?  Raise your hand, friends…nice and high…I know you’re out there.

One of the items on Frank’s black list is peas.  Such a shame, because I really like them.  Not only are they tasty, they also add such nice color to dishes.  Once in a blue moon, I’ll have no choice but to add them to a dish I’m making, mainly for aesthetic reasons, and force him to pick them out.  Bad wifey.

Anyway, I used them (a LOT of them!) in a pasta dish for myself while he was working late.  I also threw in a Japanese eggplant that Bella picked out while we were at the local market, because her favorite color is purple.  Naturally.

I also used a healthy amount of crushed red pepper in the oil, which I normally don’t do when Mr. I Hate Spicy Food Frank is home.  When it’s just me, I say bring it on…

This super quick dish is perfect for busy nights, and also for wives of pea haters 🙂 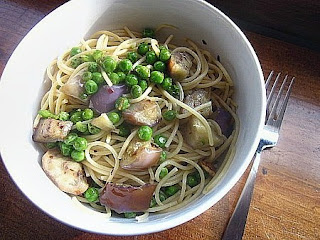 Cook pasta according to package directions.  Meanwhile, in a medium sized pot, heat oil, then add garlic and crushed red pepper.  Add eggplant, salt and pepper, and cook until slightly brown, followed by peas.  Lower heat and stir to combine.

2 Responses to Pasta with Peas & Eggplant