I was happy with the recipe I received for our first week, so I was excited to see what I’d get this time around.  The theme was lunch, and I was lucky enough to land a recipe from my friend Patrizia, who also recently started a food blog of her own.  The recipe is originally from Giada, but Patrizia made some changes, as did I.

I made this for myself while home alone (well, Bella was napping).  Frank’s not a fan of chick peas so I knew it would be a weekday recipe for me.  I had some ciabatta bread that was getting pretty stale, so I popped it in the toaster oven and of course, forgot it was in there until I started smelling smoke…oops!  It was edible, but it wasn’t “flexible”, so it didn’t make for the best picture. 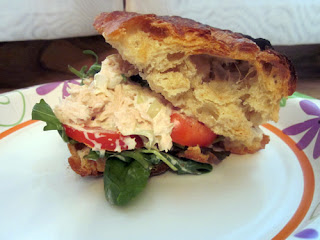 My other adaptations are reflected in the recipe below, based on what I had in the house.  I added the mayo to the tuna instead of the chick pea spread, because that’s my preference 🙂  Plus, I had to chop some onion into it…can’t have tuna salad without onion!

It was really good, but not a surprise, coming from Giada.  Thanks, Patrizia!

Tuna and Artichoke Panini
adapted from Mangia! My Family Table by way of Giada De Laurentis

In a small food processor combine chick peas, olive oil, garlic and lemon zest until smooth. If you find it to be too thick, add a little more olive oil.


Cut ciabatta lengthwise and spread chick pea mixture on both sides.  Add tomato and greens to one side, then tuna mixture.  Close up your sandwich and enjoy!

This entry was posted in Giada, sandwiches, tuna. Bookmark the permalink.