I LOVE finding side dishes that are tasty and EASY, and that’s exactly what I got this week during “side dish” week for our swap.  The recipe that I was assigned this week was no stranger to our house – I’ve made potatoes this way many times before.  The smaller red potatoes are the best in this recipe…cut them in half or quarters and they’re like little bite size pieces of deliciousness.  And of course, the more garlic, the better 🙂
Gianna, who contributed this recipe, got it from Ina Garten.  It’s been a staple in Gianna’s house for a long time, too!  Her instructions were to roast the potatoes for at least an hour, but I only needed 45 minutes for mine. 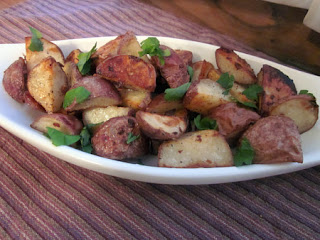 Preheat oven to 400 degrees. Cut clean potatoes in halves or quarters, leaving skins on. Place them in a bowl with the olive oil, salt, pepper & garlic; toss until potatoes are well-coated.
Spray a large baking sheet well with cooking spray.  Dump potatoes onto baking sheet and spread into one layer.
Roast for at least an hour, until brown and crisp, TURNING them twice with a spatula during cooking so they will brown evenly (mine only took 45 minutes).  Toss with a little parsley before serving.

This entry was posted in garlic, Ina, potatoes, side dishes. Bookmark the permalink.