I love salads like this.  Panzanella is definitely way up there on my list of delicious side dishes. We Italians LOVE dunking bread in “juice”, sauce, whatever we’ve got 🙂   But for some reason, I don’t make it very often!  Hmmm.

Well, after receiving this recipe from Mary Ellen’s Cooking Creations in a recipe swap, I had no choice 🙂  I picked up a nice ciabatta loaf from my local market (they have amazing baked goods/breads – yet another reason I love living in NJ).  I adapted the recipe a bit, based on how I’ve made panzanella before, and served it with grilled pork tenderloin. 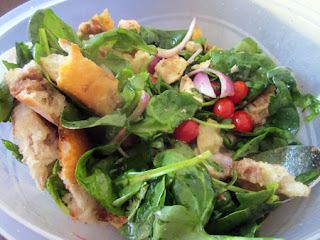 In a small bowl, put the onion, cilantro and garlic in with half of the oil, and leave in the refrigerator for at least 30 minutes.  In a large bowl, add spinach, tomatoes, mozzarella and basil.  Set aside.

Split the ciabatta loaf down the middle and spray with cooking spray.  Place on hot grill and cook until brown.  Tear into pieces and add to large bowl, followed by onion mixture, remaining oil, vinegar, salt and pepper.  Toss until combined and serve immediately.

Linked to: Salad Blog Hop
Back to Basics

This entry was posted in mozzarella, QuickAndEasy, salad, side dishes, spinach, tomatoes. Bookmark the permalink.