Even though the temps really haven’t dropped yet, I’m happy to say that it’s soup season.  I LOVE soup.  Instant comfort in a bowl.

Growing up, I had a friend who called me every night and asked what we had for dinner.  She was curious, but probably also a bit jealous because her mom never cooked.  There were nights when we’d have soup as our main dish.  A nice hearty one, like Pasta e Fagioli, was common…or Mom’s Chicken Soup…so many options, and all so good.  And my friend would be in shock.  “Soup?  For dinner?  That’s not a meal.”

These days, I love breaking out the oldies but goodies, while also experimenting with other recipes.  And I can do that even when I’m going to be out for most of the day, thanks to my trusty crockpot.  It’s a great tool for many kinds of soups, like this one. 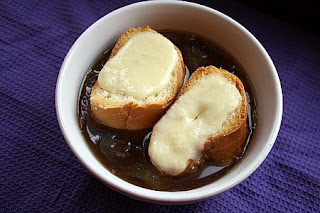 I don’t own any of those little soup crocks, you know, that you stick under the broiler when making french onion soup the traditional way.  I never found a good enough reason to buy them and have them take up a lot of cabinet space.  And because of that, I never made french onion soup…until now. 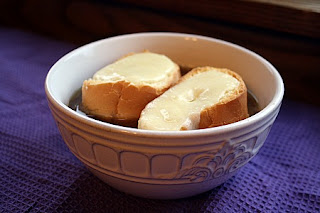 This method is just as delicious, and super easy…perfect for people on the go, or who don’t have soup crocks 🙂

Turn crockpot on high, add butter and let melt.  Add onions, cover, and cook for 45-60 minutes until they have caramelized.

Mix flour, worcestershire, sugar and pepper in a bowl.  Slowly add mixture, along with broth, to crockpot, stirring well while adding.  Cover and cook on low for 6-8 hours, or on high for 3-4 hours.

Top bread with cheese and toast for about 20 minutes at 250 degrees.  Pour soup into bowls and top with bread slices.