Several months ago, I asked my Aunt Joan for some of her recipes since I knew she had a lot of them written down.  She handed over a recipe box that was amazing, with papers that were turning yellow and tearing at the edges.  I had so much fun going through it, picking and choosing which ones I wanted to scan and keep.

This is one of many dishes that takes me back to me childhood.  The smell while they’re cooking is enough to jog my memory. 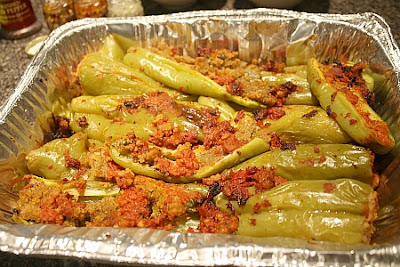 I made these the day before I needed them and warmed them in the oven right before serving.  Now that I’ve done that, I know that next time I need more crushed tomatoes/sauce since it seemed to have absorbed into the peppers after reheating.  They were still delicious, but a little more sauce would have been nice.

Cut tops off peppers and clean out insides.  Set aside.

Heat oil in a large skillet over medium high heat and add peppers.  Add tomatoes (and seasonings, if using) and brown peppers on each side.  Lower heat, cover, and simmer for at least 20 minutes.

You can reheat this later in the oven, or you can skip the frying step entirely and bake in the oven for a healthier alternative.

This entry was posted in appetizers, family, Italian, make ahead, peppers, QuickAndEasy, side dishes. Bookmark the permalink.

One Response to Stuffed Long Peppers