It’s nice to have a Sunday morning where you can kick back and relax.  That’s what Sundays are supposed to be all about, right?  Even with a 2 year old?  Hmmm…

My mother-in-law came over today for breakfast, and of course I still had all that bread on my mind, so that can only mean one thing… 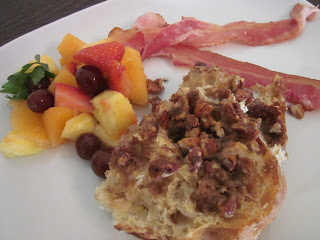 Normally when I make an overnight french toast casserole I use the same recipe, but I thought I’d try something different this time around.  It didn’t disappoint.  Sweet, crunchy, soft, hearty, and comforting.  I halved it since there were only 4 of us, and we still had leftovers.
Next time, I’ll prepare the praline topping the night before too…the whole point is to have less to do when you wake up, right?  I cut up the fruit last night, so all I had to do today was make the topping and cook the bacon (400 degree oven for about 15-20 minutes on a foil-lined baking sheet).  So simple and perfect.
Oh, and believe me when I tell you, this does NOT need syrup.  Not a drop.

This entry was posted in bread, breakfast, nuts. Bookmark the permalink.

One Response to Sweet Sunday Morning