When you know, you know.

Have I discussed the courtship that Frank and I had?  Well, simply put – it was quick.  We met, moved in together 4 weeks later, and got engaged 7 weeks after that.  Crazy kids, we were.

It happened so fast that he actually fell in love with me for ME, not my cooking.  I didn’t even get a chance to cook for him before he told me he loved me.  Crazy Frank, he was.

One of the first things I remember making him was chicken marsala, which I knew was one of his favorites.  It has since always been his most requested meal.  It’s evolved since I first started making it…I’ve made several changes through the years.  My version doesn’t look like what you’d order in a restaurant, because this is the way Frank likes it.  Chicken cut into bite size pieces, served over pasta. 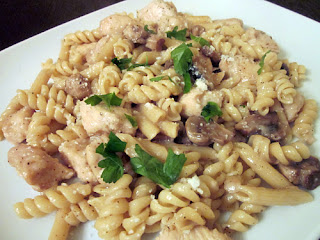 His preference actually works out well for those who need quicker weeknight meals…the chicken doesn’t take long at all to cook this way, and the pasta cooks at the same time as the chicken (and yes, you are seeing two different shapes of pasta in there…we had two open boxes so I used them both up…use whatever type you like).

And please, buy Marsala wine…NOT Marsala cooking wine.  Go to the liquor store.  I know you know where it is.  It makes a huge difference.  Pick up a nice bottle of Merlot while you’re at it…it goes well with the dish.

Give it a try – it’ll impress someone special to love you (more), too 🙂

Heat a large skillet over medium-high heat, and add butter and oil.  At the same time, place water in a pot to boil for pasta, and cook according to package directions.

Put flour in a bowl with salt and pepper.  Toss chicken into flour, shake off excess and add to skillet once butter has melted.  Saute chicken until brown on all sides.

Add mushrooms, chicken broth, marsala, and oregano.  Also, add more salt and pepper to taste.  Stir together.  Bring to a boil, then turn heat to low.  Cook for approximately 10-12  minutes, or until sauce thickens (if it doesn’t look like it’s getting thick, add a bit more butter, or make a small slurry of cornstarch and water in a separate bowl and add slowly to the pan).

Drain pasta and add to skillet.  Add salt, pepper and oregano to taste.  Combine so that all the pasta is covered in sauce.

Take off the heat and add parsley, as well as some grated cheese, if you like.  Serve immediately.

5 Responses to When you know, you know.